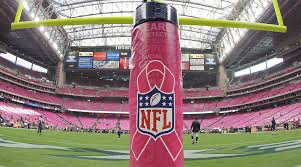 Ten years ago I was an early stage breast cancer patient going through radiation when October rolled around.  Having recently completed chemo, I was finally getting some energy back and looked forward to a day off from being a breast cancer patient, slapping on my wig and football jersey to head to a Falcons game to be incognito for the day.

I stepped into the stadium, and it was awash in pink.  Pink shirts, pink streamers, pink signs, even pink cleats on the players to bring attention to Breast Cancer Awareness Month.   I felt like an interloper at my own party; wanting desperately NOT to be a breast cancer patient for one day but bombarded with all-pink reminders that I was a breast cancer patient who would best be served by an all-pink rah-rah pep rally.  Unfortunately, breast cancer didn’t feel pink to me. It felt messy and terrifying and devastating. Even more deflating, I saw my physician’s assistant the next week and she proudly announced, “Were you at the Falcons game this weekend?  I can spot even a good wig from a mile away.”  Ouch.

I began to get jaded. When I saw a “Pink Plummer” van drive by, I wondered, “How many resources are actually going towards breast cancer? Are they using us for marketing? Or is it legit?”  When I saw a “Save the Tatas” license plate I screamed into my steering wheel, my face flush with frustration. I didn’t find it clever or funny. Not in the least.

However, another side of me was more forgiving, and quite honestly, guilty at feeling such antipathy toward a movement meant to save lives like mine. So many other cancers didn’t get this kind of attention. My friend whose mother died of ovarian cancer confided in me that she felt annoyance that everything was always about breast cancer when so many women like her mother suffered. I understood her point completely.

I tried to remind myself that while Susan G. Komen had become a little too pink for my taste, the organization also did a lot of good. When well-meaning friends and family members gave me pink blankets and stuffed animals, I started to see them as kind gestures from people who associated breast cancer with pink and were just trying to help and support me. Pink also helped people make sense of something that made them feel helpless. Who was I to judge?

As I moved on (or so I thought) from breast cancer, I gradually became less sensitive about pink. I didn’t immediately cringe when I saw a pink ribbon; I didn’t roll my eyes quite so much when I saw a 300-pound lineman in pink socks and gloves, cheesy signs adorning the football field. I got on with my life.

Then five years later I was diagnosed with Stage IV breast cancer, and I realized that I would never escape pink. I was a lifer.

I also came to the realization that in the push for early detection—the NFL’s slogan was a “crucial catch”—not enough resources were being directed towards research, new treatments, and a cure. Metastatic patients often felt like we were on the outside looking in when it came to Breast Cancer Awareness month. We were the cautionary, scary tales of what happens when you don’t make a “crucial catch”. Never mind that approximately 20% of women diagnosed with early stage breast cancer will ultimately develop Stage IV cancer and that hundreds of thousands of women live with this disease. Prevention was pink and straightforward and less terrifying than the reality that early prevention is not enough.

However, I see that things are changing. I recently received an email from Komen about strategic changes, and I know the organization is making increased efforts to include metastatic patients in the conversation. We even have our own day on October 13th. It’s a start.

“Pink-washing,” as it’s often called, is gradually starting to abate. Today, when I watch an NFL game in October, I see the shift towards making October about different types of cancers and players’ personal stories; the ribbon is now entwined with other colors as well. It feels more authentic, and quite frankly, a relief for a diehard fan like myself who just wants to escape reality sometimes with Sunday night football. I remain cautiously optimistic that the tide is turning.

What are your thoughts about pink? What is your personal experience?